Republican Talking Points Accidentally Released into the Wild! Read it Here! Includes Commentary and a Dash of Snark! 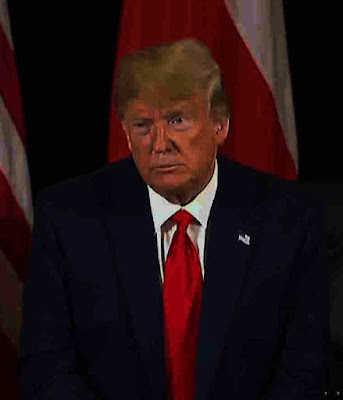 In a July 25, 2019, conversation with newly-elected Ukrainian President Volodymyr Zelensky, President Trump suggested that his country’s receipt of a nearly 400-million-dollar aid package – already approved by Congress – was contingent upon a “favor”: to dig dirt on Presidential candidate Joe Biden’s son, Hunter Biden.
The transcript of this conversation was released to the public on September 25, 2019.
Also on September 25, The White House “accidentally” released Republican “Talking Points,” published below and elsewhere, a document meant for GOP eyes only and created for spinning and deflecting from the scandal about to boil over: Ukraine-gate.
Here’s the astonishing part: The White House tried to recall this memo.
However, the GOP “talking points” have escaped out of the SCIF (Sensitive Compartmented Information Facility), and are now roaming the wild.
Some Democratic lawmakers and citizens have already tweeted about it:
US Rep Brendan Boyle @RepBrendanBoyle:
I would like to thank @WhiteHouse for sending me their talking points on how best to spin the disastrous Trump/Zelensky call in Trump’s favor. However, I will not be using their spin and will instead stick with the truth.
But thanks though.
*
Kyle Cheney @kyledcheney:
No joke: White House just emailed all Dem offices asking to “recall” the talking points email.
Anyhow…
For your reading hilarity, here are the “recalled” talking points that were not meant for Democratic eyes, with a dash of truth and snark added in, just to keep things interesting (my comments in red).
______________________________
What You Need To Know | President Trump’s Call with President Volodymyr Zelenskyy.
·         Press reports have given currency to flat-out falsehoods about the call. [NOTE: Perhaps because the press has been dead-on in its reporting on Trump.]
·         The transcript clearly shows there was no quid pro quo or anything else inappropriate about the conversation between President Trump and President Zelenskyy. [NOTE: Direct quote, which could be viewed as a smoking gun, from the transcript: “…There’s a lot of talk about Biden’s son, that Biden stopped the prosecution and a lot of people want to find out about that so whatever you can do with the Attorney General would be great. Biden went around bragging that he stopped the prosecution so if you can look into it... It sounds horrible to me.”].
·         Myth: The President made a mysterious “promise” to Zelenskyy in return for Ukraine reviving an investigation relating to Joe Biden and his son.
·         Fact: There was no such promise. The President wanted allegations of corruption potentially involving an American official to be investigated. [NOTE: What the WH wanted: dirt on Biden. See direct quote above from the transcript.]
·         Myth: The President offered a “quid pro quo” related to military aid for Ukraine.
·         Fact: There was no quid pro quo; in fact there is no mention of the aid package to Ukraine at all. [NOTE: Direct Quote from the transcript: I would like you to do us a favor though because our country has been through a lot and Ukraine knows a lot about it. I would like you to find out what happened with this whole situation with Ukraine…Meanwhile, the President was sitting on an aid package – almost $400 million – already approved by Congress]
·         Myth: The President urged President Zelenskyy to work with Rudy Giuliani to investigate Biden’s involvement in securing the firing of a Ukrainian prosecutor eight times.
·         Fact: The President mentioned Rudy Giuliani only after Zelenskyy mentioned him first and referred to Biden in only one exchange. [NOTE: Giuliani mentioned several times in the transcript.]
·         Fact: The President mentioned Rudy Giuliani only after Zelenskyy mentioned him first and referred to Biden in only one exchange. [NOTE: But it’s a biggie: The Smoking Gun]
What the President actually talked about was entirely proper. [NOTE: Uh, no. It sounds like a Mafia shakedown, filled with innuendo and implied threats.]


·         President Trump asked President Zelenskyy to investigate any connection between Ukraine and attempts to interfere with the 2016 election, something he has publicly discussed in the past. [NOTE: Sorry, but we didn’t t see this, even as innuendo.]
·         It is entirely appropriate for the President to ask a foreign leader to investigate any connection between his country and attempted interference in the 2016 election. [NOTE: Not when the demand is made to dig up dirt on a political opponent.]
·         The President did not mention Rudy Giuliani or Vice President Biden until after President Zelenskyy had raised Giuliani first. [NOTE: Yes, but Trump brought up the Attorney General first: “I would like to have the Attorney General call you or your people and I would like you to get to the bottom of it.”]
·         Only after Zelenskyy brought up Giuliani related to addressing corruption issues did the President ask Zelenskyy to speak to Giuliani and raised Vice President Biden’s role in the firing of a Ukrainian prosecutor who had been investigating a Ukrainian company that had Biden’s son on its board. [NOTE: Twisted like a pretzel.]
·         When a high-ranking U.S. government official, like then Vice-President Biden, brags that he used his official position to derail an investigation in another country that could have impacted his son, it is appropriate for the President to suggest that the matter be looked into. [NOTE: A total lie. In fact, Joe Biden was pretty much in the dark about Hunter Biden’s activities in the Ukraine. One could argue that his ignorance was intentional, but that’s another issue.]
·         That is not seeking foreign “interference” in a U.S. election, it is suggesting that allegations of an abuse of office merit looking into. [NOTE: Another twisted pretzel.]


The real scandal here is that leaks about a second-hand account of the President’s confidential telephone call with a foreign leader triggered a media frenzy of false accusations against the President and forced the President to release the transcript. [NOTE: It’s called “investigating allegations of wrongdoing.”]
·         The country has already been put through over two years of investigation by the special counsel into a phony Russian collusion story, six months of congressional investigations into the same issue, and now Democrats want to trigger a new round of investigations into fake accusations. [NOTE: Classic Republican deflection.]
·         This case just shows another example of the “Deep State,” the media, and Democrats in Congress damaging our national security by leaking confidential information in an attempt to seek political gain. [NOTE: Typical unfounded conspiracy allegations.]
Let’s be clear, there was no quid pro quo for Ukraine to get US aid in exchange for looking into Biden or his son. [NOTE: The evidence suggests otherwise.]
·         Assistance to Ukraine was mentioned by President Trump only to stress how much the United States is doing and how other countries, like Germany, need to do their fair share. [NOTE: More classic Republican deflection.]
·         The President has said repeatedly that he wants other countries to be pitching in more to help Ukraine and President Zelenskyy agreed with him. [NOTE: Irrelevant point in terms of the Impeachment Inquiry.]
These are unique circumstances that require the transcript to be released if the American people are to know the truth. [NOTE: Something with which both Democrats and Republicans can agree.]
·         After Secretary Pompeo talked with the government of Ukraine, the President determined to release the transcript of his telephone conversation to end the wild speculation and to set the record straight. [NOTE: Something with which both Democrats and Republicans can agree. However, the release of the transcript is not likely to benefit the president or the Republicans who continue to support him.]
·         The President believes his private conversations with world leaders should be kept confidential and made this exception in the interests of transparency because of the amount of misinformation being spread in the press. [NOTE; Total and complete bullshit. “Democracy dies in darkness.” Motto used by the Washington Post – you know, the same newspaper that broke the Watergate scandal.]
·         The idea that someone can hear a second-hand account of a confidential conversation and use it in a complaint to start a partisan investigation fundamentally undermines the office of President. [NOTE: No, it keeps the office of the President honest.]
·         This is just another example of the “Deep State,” the media, and Democrats damaging our national security for political gain. [NOTE: Yep. Bring up those old tired tropes of conspiracy and the evil press going out of its way to “get” poor little Donnie. Here’s a suggestion: stop treating the presidency like a Mafia fiefdom.]
This complaint was handled absolutely by the book and it was properly determined that no further action should be taken. [NOTE: Of course. Republicans in power will do anything to protect this president because The Supreme Court! Abortion! Healthcare – Not! Tax Cuts for The Rich! War with Iran! Immigration! Kids in Cages! Ethics? Who cares?]
·         After receiving the complaint from the ICIG, the DNI appropriately consulted with the Office of Legal Counsel (OLC) at the Department of Justice. [GOAL: “How best to spin this problem and dig this president out of yet another hole?” Okay, got it!]
·         OLC determined that this complaint did not fall within the scope of the Intelligence Community Whistleblower Protection Act, and, therefore, that the DNI was not required to send the complaint to the intelligence committees. [You mean asking a foreign power to dig up dirt on a political opponent is not a serious abuse of presidential power? If not, what WOULD you define as abuse of power? What would you do if a Democrat were president and asked, say, Canada, to dig up dirt on a Republican presidential candidate? I suspect you’d be howling like banshees. No?]
·         The DNI did not forward the complaint because it implicated significant, constitutionally based Executive Branch confidentiality interests and there was no applicable statutory requirement. [Now the fix is in. You are not interested in seeking the truth.]
·         While the DNI determined that the complaint should not be sent to Congress, that did not end the review of the complaint. To the contrary, the complaint was given to DOJ for appropriate review. [NOTE: Where investigations of the president and his cronies go to die. Laugh emoji inserted here.]
·         DOJ officials reviewed the complaint in light of the legal issues identified by the ICIG in his cover letter to the DNI and determined that no further action was warranted. [NOTE: Of course not. But Hillary’s emails!!!]
·         Myth: The President offered a “quid pro quo” related to military aid for Ukraine. [True.]
·         Myth: The President urged President Zelenskyy to work with Rudy Giuliani to investigate Biden’s involvement in securing the firing of a Ukrainian prosecutor eight times. [True.]
·         Fact: There was no quid pro quo; in fact there is no mention of the aid package to Ukraine at all. [NOTE: So why did the president sit on the nearly $400 million aid package, even as he was speaking with President Zelensky on that hot July day? According to Time (24 September 2019), “President Donald Trump ordered his staff to freeze nearly $400 million in aid to Ukraine a few days before a phone call in which he pressured the Eastern European nation’s leader to investigate the family of political rival Joe Biden, a revelation that comes as more Democrats move toward impeachment proceedings.” Methinks your president is royally screwed.]